It hurts my feelings

We were many to welcome the respect for the distress caused by the horrific terrorist attack on Charlie Hebdo and a kosher market expressed by the participation of both royal family members and high-ranking officials from the Middle East on the occasion of marching in Paris in memory of the freedom fighters no longer among us. We accept the message from leaders in the Middle East that they do not wish to deprive us of our open societies precious to us. If only we had never lived to witness the cruel and inhumane treatment of the Saudi citizen Raif Badawi taking place in Jeddah almost simultaneously.

We do not hold fellow citizens of the Muslim faith responsible for the intolerable deed on January 7, 2015 in Paris the very cradle of free press in a country that founded the ideals of freedom of heart and mind.

It hurts my feelings to learn that the value most dear to me – namely freedom – is denounced by Saudi clerics as ‘perverted liberal thought‘. Read the clerical ruling linked to – as received from the Badawi family. Raif Badawi’s brother in law, Waleed Sami Abu Al-Khair, who is a lawyer, has been his defendant. Al-Khair has now also been jailed and charged by the clerical criminal court in the Kingdom.

At a time of countries summoning to help not least the Saudi Kingdom to fight extremism grown out of Saudi clerics’ indoctrination, my heart trembles since I cannot avoid to face the fact that Saudi clerics are apt to wish for the mutilation and even death of the many of us devoted to liberal tolerance, while we willingly fight to the death not only for our own freedom but the freedom of Saudi clerics and everybody else as well.

Saudi Arabia never ratified the Universal Declaration of Human Rights. However, the Kingdom did join the international society in the denouncement of torture. But how are we to understand the excessively cruel punishment of a Saudi citizen who did nothing but to speak his mind in an entirely democratic fashion?

“Flogging is, in my view, at the very least, a form of cruel and inhuman punishment, UN High Commissioner for Human Rights Zeid Ra’ad Al Hussein said in a press release issued earlier today. ‘Such punishment is prohibited under international human rights law, in particular the Convention Against Torture, which Saudi Arabia has ratified,’ he added.” UN High Commissioner for Human Rights

To hand a young peace-loving father of three a sentence of no less than 1000 lashes is to hand a death sentence to be executed in the course of 20 weeks or for as long as Raif Badawi will survive. The longest death struggle one can think of. Explain to us how to explain this to the three innocent children of the Badawi family.

All liberal humanists urge the Kingdom to pardon Raif Badawi and to allow him to leave for asylum that many countries willingly will grant him and his ill-treated family.

Why the 7th? On that date Charlie Hebdo was attacked in 2015 in January. On that date in May 2012 the Saudi thought police declared war on the Badawi family on cause of Raif Badawi calling on a conference headed ‘the day of liberalism‘- read more on PEN International’s homepage.

Why so hurt? On the occasion of the cartoon-crisis in Denmark, the Egyptian ambassador staged a major international diplomatic crisis on behalf of a dozen other Middle East Ambassadors. Mona Omar Attia is cited by Berlingske to say that ‘the PM needs to talk to the newspaper to convince them that an apology is necessary.’ Will Mona Omar stage a similar move conjoined by the dozen other Middle East Ambassadors to urge the Criminal Court in Jeddah to convey their apology for insulting liberalism, hence, severely hurting the feelings of millions of responsible liberals in the West and elsewhere?

1 kommentar til It hurts my feelings

Secularism respects everyone and does not offend anyone ...

Secularism ... is the practical solution to lift countries (including ours) out of the third world and into the first world. rb,The Guardian, UK
Photo: PEN International 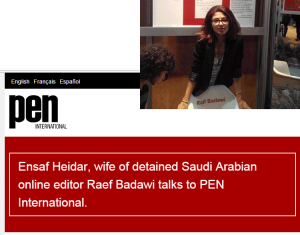 I wish that one day there will be real freedom, a constitution, a parliament, and absolute freedom. eh

Volunteer to take the lashes 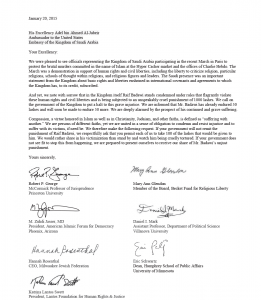 We who share in the liberal thought should also share in the lashes, if we are to be believed when quoting Voltaire willing to give his life. With so many backs the clerics may wear out their lust for lashes.

We ask for no recantation on part of those in faith. We volunteer our backs to prevent a recantation enforced on Raif Badawi. jsc 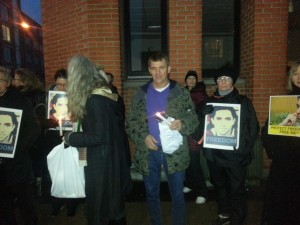 “We are seriously concerned by Raif Badawi’s case,” a spokesman said. “The UK condemns the use of cruel, inhuman or degrading punishment in all circumstances. The foreign secretary has raised the matter with the Saudi ambassador, and we’ve previously raised the case at a senior level with the Saudi authorities.” The Saudi embassy declined to comment.

Amnesty has accused the UK of being “muzzled” by its commercial and defence interests in the conservative kingdom. (The Guardian)